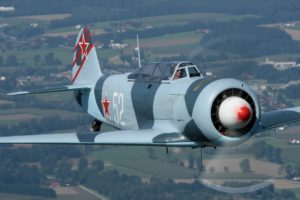 YAK 11 “Moose” D-FYII
In the design of the Yak-11, which was put on paper from 1944, the designer Alexander Yakovlev orientated himself on the Yak-3, the last link in the chain of Yak fighter aircraft during World War II. Unlike the predecessor, however, a star engine ASch-21 was provided instead of the previously used V-engines. As with many Soviet aircraft constructions of the time, there was also emphasis on simple production and maintenance; there were various removable fairings and flaps that facilitated access to the engine. The two-leaf adjustment air screw was initially bent crescent-shaped, but was later replaced by the straight 3m propellers of the type WISch-111-W20 or WISch-11-D-15.
On November 10, 1945, the first prototype, called Jak-3UTI, took off for its first flight and then completed the test, which lasted about a year, and some changes were made to the aircraft. Series production began in 1946/47 and ended in the Soviet Union after 3859 built. The Yakovlev Yak-11 (NATO codename “Moose”) was specially designed and used for advanced training of fighter pilots in all member states of the Eastern Bloc and Warsaw Pact as well as in the Middle East (Egypt, Yemen), China and Austria.
From 1952 to 1956, 707 Jak-11 were built under licence at the Kunovice aircraft plant in Czechoslovakia. They were referred to as Let C-11 (with some strings and slats of wood being replaced by metal).
From 1951 to 1954, the Jak-11 set four international records, which were recognized by the FAI.
The model shown here is a LET C-11 with serial number 171312 with an M-21 7-cylinder star engine (Czech license building of the Ash-21) and a starting power of 700 hp, which was licensed at the plant in Czechoslovakia Let Kunovice in November 1955 and handed over to the Czechoslovak Air Force in 1312. After the exclusion of the military operation, the aircraft was handed over to the Czechoslovak Aeroclub in August 1964, where it received the registration OK-JIK. It was a member of the well-known aerobatic squadron from Mlada Boleslav and took part in air shows in various cities in Czechoslovakia and other countries, including Austria. The last flight took place on 12 June 1976 and the aircraft was then stored in the Aviation Museum in Kbely (Prague). In 1989, the aircraft came to Germany in exchange for a Bücker. In the same year, Anthony Bianchi (Personal Plane Services Ltd., Booker UK) acquired the aircraft. Already in 1992 it received the registration G-BTZE. In 2007, the aircraft was sold again to Mr. Mark Riikse and the restoration by PPS began. The color scheme was modelled on a special painting of a Soviet squadron. The first flight made after the restoration took place on November 30, 2011. In 2017 the Yak 11 was then acquired by the current owners and will be operated under registration D-FYII in Mühldorf/EDMY in Bavaria together with the T-28 D-FUMY
Top speed 600 kmh
Cruise speed 350-400 kmh
Max. Take-off weight 2,480 kg
Service peak height 7,100 m
Max. Range 900 km
Pilot Alex Balk/Rainer Steinberger
Display Static