The Patrulla Águila (en. Eagle Patrol) is the Spanish Air Force’s official aerobatic team. It is the second Patrulla Acrobática Nacional: The Patrulla Ascua flew four North American F-86F Sabers for Spain from 1956 to 1965. The Patrulla Águila was founded in 1985 and has been stationed at the San Javier Air Force base near La Manga del Mar Menor ever since.

Initially five, then six, and, from April 1988, seven pilots fly slightly modified models of the CASA C-101 Aviojet. Alongside a bespoke livery and the smoke generators needed for aerobatics, the aircraft boast larger fuel tanks for flights of up to seven hours. They have a high service ceiling of 14,000m and a top speed of 845km/h.

Fans can look forward to one of the rare international appearances of the Spanish aerobatic team at AIRPOWER19. Topping off their display is their unique synchronised ground manoeuvres which no other aerobatic team performs. 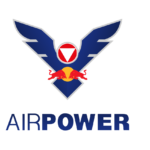