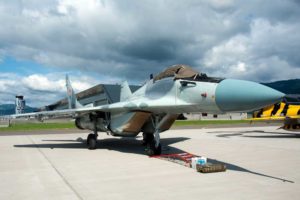 The concept of the MiG-29 dates back to the 1970s. The Soviet army was looking for a light front fighter that could challenge the new American jets, such as the F-15 Eagle. The plan by legendary design office Mikoyan-Gurevich was convincing. Thanks to its mobility, the twin-jet MiG-29 is a highly effective enemy in air combat – and it can fly the Cobra, a figure in which the aircraft practically rears up when stationary, forcing the enemy to overtake it.
The jet has dual-target acquisition. In addition to the pulse-Doppler radar, there is an infrared viewfinder with a laser rangefinder. It is used when the enemy is in visual range. The radar is passive, making the MiG invisible to its opponent’s radar detector. The radar is only used when visual contact is broken.
A Slovak Air Force MiG-29 will be on show in the AIRPOWER19 static display.
Facts & Figures
Manufacturer Mikoyan-Gurevich
Version MiG-29 Fulcrum
Length 17.32m
Height 4.73m
Wingspan 11.36m
Max. Take-off weight 20,500kg
Maximum speed Mach 2.25 / 2,390km/h
Service ceiling 18,013 m
Engines 2x Klimov RD-33 turbofan engines
Thrust 2x81kN (with afterburner)
Crew 1
Display Static