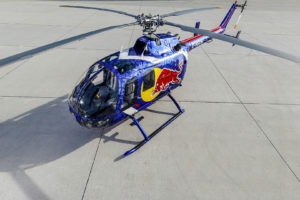 2,400kg flying on its head with ease? The BO105 masters this feat – and many more. It remains the only helicopter that is fully aerobatic. In 1963 MBB started considering construction of a helicopter in the two-ton class. The basic idea was fascinating: A revolutionary rotor system was to be developed – as the basis for a completely new helicopter concept.

In 1966 initial testing of the first hingeless rotor system began and proved promising. Innovative materials played a decisive role. For example, titanium was used for the rotor head and glass-reinforced plastic for the rotor blades. These blades have a virtually unlimited lifespan. Their enormously high elasticity made it possible to design a jointless rotor system that was easy to maintain, had a low vibration level, and guaranteed unsurpassed manoeuvrability.

As the first light helicopter in the world, the BO105 was also equipped with two engines, dual hydraulics, and a dual electrical supply. Innovations that make aerobatics conceivable. The BO105 is to this day the only helicopter that can perform true aerobatics, covering almost all the manoeuvres known from aeroplanes. The first flight took place in February 1967. The first helicopters were delivered to the Federal Armed Forces in 1978.

1,425 BO105 helicopters were manufactured by 1997. Production was finally stopped in 2001. Today, civil, paramilitary, and military BO105s fly in over 35 countries worldwide. It is particularly common in rescue operations and offshore operations. The two Flying Bulls’ BO105s rolled off the assembly line in 1974 and landed at the Flying Bulls after their job as police helicopters ended in 2005.