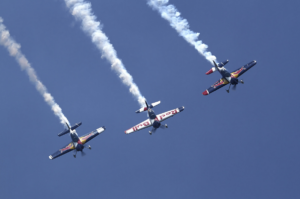 Until now they were the substitute team for the world-famous Flying Bulls Aerobatic Team But now Stanislav Čejka and Jan Rudzinskij, together with Miroslav Krejci a long-time team member, are attracting attention in their own right at air shows. And they will attract more attention. This season they replaced the ‘classic’ aerobatic Zlín 50 LX aircraft with the XtremeAir XA42, which Rudzinskij showered with praise: “It really has it in it! It’s like suddenly driving in Formula 1 after driving a good sports car. The difference is really huge.”

The aircraft has a 315hp engine, making it one of the most powerful aerobatic aircraft. The maximum speed is about 220 knots (approx. 420km/h). “These machines are extremely fast. However, this is not always an advantage when performing, because you lose visual contact very quickly. More importantly, the old planes were controlled by the movement of the hand, and the new ones by micro-movements of the wrist. This must become second nature,” Rudzinski says. However, there is the one advantage that the pilot in the cockpit of the new aircraft is better informed about what is happening in the aircraft.

Everyone trains in aircraft whose design has Czech flags on the engine and nose. This creates a flying routine with which they introduce themselves to the public. The complete choreography will not be announced in advance, but part of the flight routine will consist of a dense formation where the Flying Bulls Aerobatic Team will fly among each other to the sounds of music. Of course, there are also impressive individual manoeuvres. “We will expand the flight manoeuvres to exploit the new aircraft’s capabilities for the demonstration of more sophisticated flight elements,” said Stanislav Čejka. The demonstration includes a particularly popular manoeuvre in which a heart is drawn into the sky with artificial smoke. A very special manoeuvre, a speciality of the Flying Bulls Aerobatic Team for decades, will also be demonstrated – THE MIRROR STUNT FLIGHT. The flight choreography has been adapted to the new aircraft. The tradition of the extremely dense formation is continued, but new choreographies are also shown throughout the entire staging area. The team used three aircraft at the start of the 2015 season.

The most daring feat in group aerobatics is the mirror flight. The leading aircraft flies on its back directly above a second aircraft in normal orientation, which in turn follows the flight choreography of the leading aircraft. Will Čejka and Rudzinskij be there? The last time the Flying Bulls Aerobatic Team used the ZLIN 50LX aircraft was in the 2014 season. The faces of new pilots and a new type of aircraft appeared in the 2015 season.

The Flying Bulls Aerobatic Team are very experienced pilots. Squadron leader Stanislav Čejka (36), who replaced the famous squadron leader Radka Machova, came to flying in the usual way when he started flying gliders at the age of sixteen. Then he added motorised flying and later opted for aerobatics. He was the national champion, participated in the European Championship and is now a professional pilot. He is a military pilot in the JAS-39 Gripen fighter jet. “It’s wonderful work,” says the lieutenant, who is stationed at the Čáslav air force base. It is probably no coincidence that Martin Eonka, the only Czech participant in the prestigious series of Red Bull Air Races, comes from the same unit.

He also flew a Gripen. Čejka explains that “the two types of flight complement each other. The more you fly with a fighter jet, the better you find its attitude. This is then transferred to aerobatics. You no longer have to think about how you move in space. In aerobatics, what counts is precise control of the aircraft. In a fighter jet, this enables you to not just think about the control stick allowing you to concentrate on other things such as controlling the flight systems.”

Jan Rudzinskij’s (45) roots are somewhat more complicated. He also wanted to start with a glider, but … “The communists thought that I was not a suitable candidate and that the Blaník sailplane could fly into imperialist territory.” It was only after 1989 that he was given the opportunity to fly. “As soon as I made some money, I started flying, and I moved quickly to aerobatics.” In addition to the Flying Bull aerobatic duo, he takes part in air shows in his biplane. He experienced the worst moments of his life in 2006. At an air show in Bratislava, he collided head-on with his biplane while recreating a scene from the First World War and plunged 50 metres. “I had to be treated for five months and during that time I told myself that maybe this was a warning shot and I should stop. But then I came to the conclusion that it was my fault. Three months later I was back in an aircraft with a flight instructor. My goal was to fly again, and that accelerated my convalescence,” says the man who was involved for years in an advertising agency he recently sold. “Now I’m waiting to see what happens.” Jan replaced the excellent Jiri Saller on the left wing.

Miroslav Krejci (59), the only pilot remaining from the previous Flying Bulls Aerobatic Team, is a former member of the Czech National Precision Flying Team and took on the role of team mentor. The Flying Bulls Aerobatic Team relay was always considered the best aerobatic squadron in the world. They can fly so close to each other that they operate as a single plane. All team members are Czech. The team so far has consisted of Radka Máchová (66), relay leader from 2002 – 2015, Jiří Saller (62) on the left wing, Miroslav Krejčí (59) on the right wing and Jiří Vepřek (54) in the rear position (slot). The Flying Bulls used Zlín 50 LX aircraft for their aerobatics.

More information about the Czech Aerobatic Team can be found at www.flyingbulls.at/de/friends/czech-aerobatics-team