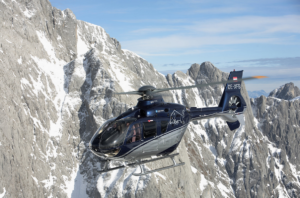 The Eurocopter EC135 is probably the most modern interpretation of a multi-purpose helicopter and technically and visually “State of the Art”. The construction in CFRP (carbon fiber) offers enormous advantages in terms of structure and weight as well as due to the precise shapes aerodynamically. Even the rotor blades are made of this modern material.

Eurocopter offers two drive variants with almost 650 hp each. On the one hand, the wave gas turbine of the Canadian manufacturer Pratt & Whitney or that of the French manufacturer Turbomeca Arrius, which traditionally owes its name to a mountain in the Pyrenees, the “Pic d’Arrius”. Both engines give the EC135 flight performance of approximately 300 km/h and bring them to altitudes of more than 6,000 meters.

The jointless and bearingless main rotor reduces the usual vibrations to a minimum, while at the same time the reduced mechanical forces have increased agility and reduced noise.

Eurocopter also broke new ground with the rear rotor. It is a so-called fenestron, i.e. the rotor is encapsulated. Due to the high development effort, this type of construction was not very popular with the technicians at first. Today, however, it is an essential part of the successful overall concept.

Another and decisive advantage is the reduction of the risk of accidents. Especially in difficult and demanding air rescue operations in a confined space, both the helicopter and humans are optimally protected, because the sheathed tail rotor cannot be damaged in case of accidental contact with bushwork etc., but above all it can be do not injure bystanders.

Electronics and avionics (the instruments built into the aircraft) are also up to date. Thus, the motor control system uses a FADEC system (Full Authority Digital Engine Control), which means that the entire control and control of all motor-relevant processes happens fully automatically. This is a great advantage, especially when starting the turbine. On the avionics side, all flight, motor, navigation and radio-relevant data are displayed on modern multifunction screens.

Historically, the EC135 originates from the BO105 of the traditional company Messerschmitt-Bölkow-Blohm (MBB). At Eurocopter, which was founded in 1992, MBB brought the prototype BO108 into the company as a further development of the BO105. However, the BO108 never went into series production. However, this prototype was the basis for the EC135, which took off in February 1994 for its maiden flight as the first helicopter of the series in Ottobrunn near Munich.

Series production has been running since 1996. Since then, more than a thousand pieces of this coveted multi-purpose helicopter have been delivered to 58 countries. This makes the model the biggest success in the relatively recent history of the 100-year-old subsidiary of EADS (European Aeronautic Defence and Space Company).

With the ADAC Luftrettung, the Federal Border Guard and the Bundeswehr, the EC 135 found many customers. But neighbouring countries such as Austria with its ÖAMTC air rescue and France with its SAMU air rescue as well as the United States of America are also following this pattern. Surely this helicopter can claim to embody the highest state of technology (state of the art) and also to be constantly modernized.

For example, an EC 135 research helicopter with fly-by-light technology is currently flying together with DLR (German Aerospace Center). Here, the control commands are transmitted by means of light by fiber optic cables instead of the electrical signals of the usual fly-by-wire control via cable. The main advantage is the enormous safety with regard to electromagnetic interference factors. In addition, this technology can be used to simulate controls that fit any size of helicopters. This research helicopter is virtually a flying simulator – guaranteeing that state-of-the-art will remain the brand feature of Eurocopter helicopters in the future.